← Jeremy and Bonnie vs. Caroline and Matt
Stefan vs. Damon → 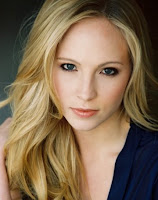 Guess what, Chicago? You have something cool to look forward to this month! Warner Bros. has just announced that The Vampire Diaries will have a presence at the Chicago Comic & Entertainment Expo, March 18-20. C2E2 is “a convention spanning the latest and greatest from the worlds of comics, movies, television, toys, anime, manga and video games” and Candice Accola, Michael Trevino, and Julie Plec will be there on Saturday, March 19th for a signing and a panel. Rad, right? Purchase tickets via the C2E2 website now! (Psst, buy ‘em before March 14th and they’re only $25!)

From the Warner Bros. press release:

5:00–6:00 p.m. The Vampire Diaries Special Video Presentation and Cast/Producer Q&A — The Vampire Diaries descend on the Windy City — a C2E2 first! Join season two breakouts Candice Accola (starring as Caroline Forbes) and Michael Trevino (starring as Tyler Lockwood), as well as executive producer Julie Plec, for an in-depth discussion on each character’s recent supernatural transformations. From Caroline’s undead vampire awakening to Tyler’s bone-crushing werewolf metamorphosis — don’t miss this unique opportunity to connect with the cast and find out what it takes to become immortal. NOTE: Attendees are subject to change. From Bonanza Productions Inc., Outerbanks Entertainment and Alloy Entertainment in association with Warner Bros. Television and CBS Television Studios, The Vampire Diaries airs Thursdays at 8 p.m. ET/PT on The CW. Connect with The Vampire Diaries community on Facebook at http://www.facebook.com/thevampirediaries and on on Twitter: @CW_VampDiaries. IGN Theater/Room 375E

← Jeremy and Bonnie vs. Caroline and Matt
Stefan vs. Damon →