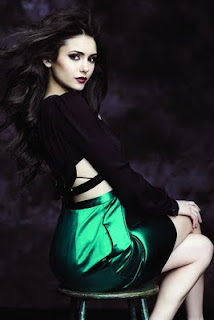 The phrase March Madness has a new meaning this year. It’s a description of the mental state of “Vampire Diaries” fans who must wait until April 7th to see another new episode of the addictive CW drama. Fortunately, Nina Dobrev, who plays both heroic human Elena and deliciously evil vampire Katherine, has come to the rescue, offering her insights about playing a dual role, which Salvatore brother is the right man for Elena, and how Katherine became the only Bulgarian character on American television.

When you originally tried out for “Vampire Diaries” did you audition for Katherine as well as Elena, or was it a surprise that you were playing a double role? When I first auditioned, I worked really hard and crossed my fingers that I would get the part of Elena. I had no idea I would also be playing Katherine. Much later Katherine was introduced into the script through the flashbacks and I found out I was both Elena and Katherine. It raised the stakes and changed the opportunity from just the role of a girl next door to two very conflicting and different challenges. You do such a great job of playing two distinctive characters. How do you approach each role? What drives each character? It’s not always easy for sure, but it keeps me engaged and keeps me challenged. The clothes, accessories, hair, and all those seemingly superficial details really help me transition and embrace whichever role I’m playing. For example, if I’m rocking a pair of Converse I can sink into Elena, but if I’m wearing some edgy boots, I naturally begin not only walking but I also feel like Katherine. I think the motivation behind both characters is very different. For Elena it’s the people she cares about. She would do anything for her friends and family. For Katherine, it’s self-preservation. Really, she’s just looking out for herself and only herself.

Posted on March 7, 2011, in KUCT NEWS, Nina Dobrev Sinks Her Teeth Into Dual Role. Bookmark the permalink. Leave a comment.