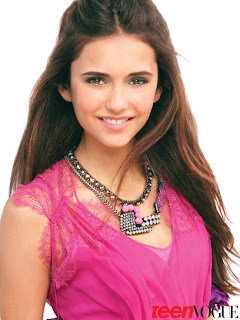 Teen Vogue officially unveiled content from their April 2011 issue today and (as we already knew via Twitter) it’s Nina Dobrev who graces the cover.

“When I signed on to the show, I didn’t know whether I’d be playing both girls,” says Nina, who tends to identify with Elena but has more fun with Katherine. “And while it’s been cool, it’s also exhausting because it’s double the work. You invest so much of your heart and soul and energy into making even one character. It’s like doing two movies at once.”

The issue hits newstands on March 15th but you can get a sneak peek at Nina’s photo spread and an edited version of the accompanying article at TeenVogue.com. Pick up the issue to read the entire story! Also, check out how you can win a visit to The Vampire Diaries set!