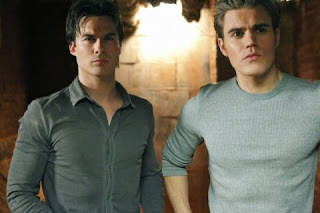 Fans tend to prefer Damon over Stefan—but Katherine doesn’t. In her eyes, what is it that Stefan has that Damon can’t compete with?

2.He’s been totally head over heels for Elena since the day he met her.

3.Stefan claims to hate Katherine–and no matter how hard she tries to seduce him, it never works.

1.Katherine was his first love.

2.It took him more than a century to get over her–assuming he truly is.

3.Damon tries to get the upper hand with Kat, but she’s an expert at manipulating him.

When Damon played hard-to-get last week, Katherine suddenly wanted him more. If he keeps it up, will she finally choose him over Stefan–or do you think he’ll always be second best to TVD’s resident vamp-bitch?