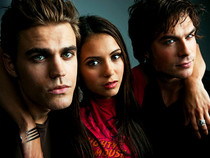 Although the two are not together on “The Vampire Diaries,” many fans have still found themselves rooting for Elena and Damon to somehow get together. Why? A good reason for it may merely be the fact that Damon is the “rebel,” and he presents that sort of unknown excitement that may not be there for Elena and Stefan.

However, there is also a pretty large difference between reality and fantasy — something that actress Nina Dobrev is pretty quick to point out in a new interview with Fancast:

“Although it seems like an adventurous opportunity, it’s a bit precarious to go along with Damon, so I doubt she would put herself in the line of danger. Plus she is known for her loyalty, so it would definitely be surprising.

“Elena loves Stefan because she feels a deep connection with him that surpasses all the common emotions of high school life. Katherine loves Stefan because her history with him ties back further than most mortals could ever understand. And it’s like a game of cat and mouse. He’s playing hard to get. It’s exciting for her.”